Scalin is an advanced application of the holographic principle of the universe.

The physical universe is widely seen to be composed of “matter” and “energy”. Yet a growing group of scientist’s regards the physical world as made of information, with energy and matter as incidentals of a two-dimensional information structure “painted” on the cosmological horizon. The three dimensions we observe are only an effective description at macroscopic scales and at low energies. 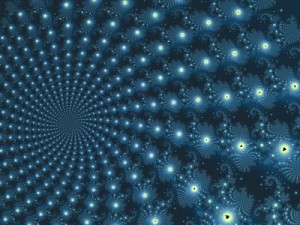 When something is holographic, it exists wholly within every fragment of itself, no matter how many pieces it’s divided into.

The non-local holographic principle is an immense force of change in the quantum world. Just as a hologram contains the original image in all of its many parts, any change made to just one of those segments becomes reflected everywhere throughout the pattern. A single change in one place can make a difference everywhere.

Even if we divide the universe into four smaller fragments, for example, every piece is a mirror of the entire universe. A change in one place is reflected in every mirror.

The Swiss psychologist Carl Gustav Jung coined the word “synchronicity” to describe the experience of events that are apparently causally unrelated, yet occur together in a meaningful manner. Synchronistic events reveal an underlying pattern, a conceptual framework that encompasses, but is larger than any of the systems that display the synchronicity.

Following discussions with both Albert Einstein and Wolfgang Pauli, Carl Jung believed that there were parallels between synchronicity and aspects of relativity theory and quantum mechanics. Synchronicity is perceived as being a law of attraction in a higher-dimensional space, but is actually caused by convergence in the lower-dimensional reference system.

Reconnecting is creating a holographic token based on a new digital note, containing both subject and information. Just as a hologram contains the original image in all of its many parts, any change made to just one of those segments becomes reflected everywhere throughout the pattern. A single change in one place can make a difference everywhere.

The subtle power of the hologram is that it offers us the leverage to make a tremendous change on a large scale by altering a pattern in only one place.